John Wesley Powell named this “the Canyon of Desolation,” perceiving it as “a region of the wildest desolation.” But to those who love high deserts, the Green River is truly magical here, where it splits the 10,000 ft.-high Tavaputs Plateau to form Desolation and Gray Canyons. Its water sustains brilliant green cottonwoods that beautifully offset the surrounding formations. Here, the Green River is warm enough to provide a welcome embrace, cool enough to restore one’s spirits from the intense heat and sun.

As the historical marker at Sand Wash notes, Desolation Canyon was selected as the landmark to commemorate the centennial of the 1869 Powell exploration, because it is the least changed from Powell’s time. The deepest and longest of the canyons of the Green, Desolation Canyon has ample evidence of human efforts to scrape out a living here over several thousand years, from Fremont granaries and pictographs to homesteaders’ ranches, but almost all are essentially abandoned now, their non-habitability proving up Powell’s perception of the essential wildness of this place.

A short flight in 5-passenger planes from the Green River airport brings us to a sketchy dirt airstrip high on a mesa, a 45-minute hike away from Sand Wash, at Mile 96 on the Green River, where our six-day Desolation Canyon river trip begins.

Laurel (Dwight’s daughter) and Shawn have renewed their licenses in order to serve as two of the river guides for this “extended river family” trip full of several generations of river guides and river rats, plus a big crop of children and a handful of adults who are self-described “river virgins.” Veteran status goes to Chris Hogan, who first worked on the Green and Colorado Rivers in the late 1960s. “Big Hogan” is also a friend of Dwight’s since junior high, and “little Hogan” is his namesake. We have three current CRATE (Colorado River and Trails Expeditions) guides, already river-experienced in their early 20’s, to do the heavy lifting. And to add to our “full circle” experience, Ken Quist, son of famed boatman Bob Quist and namesake of Ken Sleight, helped us load up at the warehouse and at Sand Wash.

Though the river is dammed upstream, it feels more natural, less “damned”, and thus strikingly different from the water in the Colorado River below Lee’s Ferry. Here, the Green River is warm, silty-brown, with many sandy beaches that attest to natural river processes — illusory, to some extent, since the dam is there, but welcome. 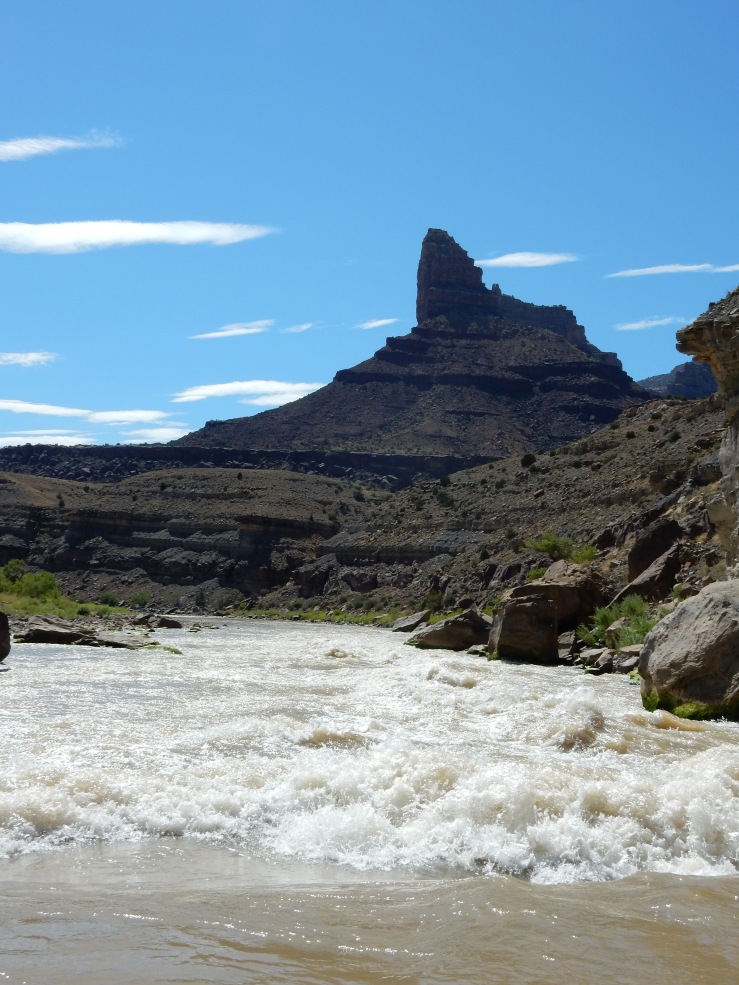 During our trip, we were often in bear country, but we saw none. We saw groups of bighorn sheep (twice!), a bald eagle, lots of great blue herons, and we enjoyed the music of canyon wrens. Damselflies and scary-ugly catfish were our constant companions on river. Cottonwoods, junipers laden with fat berries (technically female seed cones), sagebrush (Artemesia tridentata) and horsetail (Equisetum spp.) battled with the dreaded tamarisk for space along the shoreline and side-canyon streams. We swatted mosquitoes and biting flies, but all things considered, their numbers were reasonably low. Bleached bones on side trails and at campsites paid tribute to the cycle of life in this place that looks desolate and barren only at superficial glance.

Where did those six days go? They were like little Hogan’s best rock-skip on the river — six skips, and the rock disappears forever into the river, into our memories. But for almost all of us, this wasn’t our first rodeo — and my hope for all of us is that it certainly won’t be our last. Even so, it will never again be the same river:

“You cannot step twice into the same river, for other waters are continually flowing on.” ~Heraclitus, 6th century B.C.

I love the fact that the great river close to Heraclitus was called the Meander, and I love that he was considered a loner and something of a crank. As for that ever-changing river, not only do the waters continually flow on, but storms brings in silt, rocks, and debris from the side canyons, huge blocks fall into the river, sand and rock cobble continually move and are re-formed into new beaches and cobble bars, water levels rise and fall. But the ever-changing river is also eternal, and we are always welcome to come to the river to meander.

Note: I took photos sparingly, often without people. My apologies to the many wonderful people on the trip who are absent from the small selection of photos I’ve posted here. You can see Dwight’s photos here: they include many scenes not included here: individual and group photos, side hikes, and more. ~Betty